My small town high school did not offer ag education classes like many and there were not a lot of classes offered for college-bound students.  To keep myself occupied with more challenging courses, as I liked to stay busy, I took 16 college credits each semester of my senior year of high school with a combination of online and ITV (interactive television) classes.  These classes were all administered through three different community and technical colleges and I was able to get most of my generals done while I was in high school.  I learned a lot from each of the classes and felt better prepared for college.  Looking back, I'm not really sure how I managed to maintain such a good GPA in those classes because I was still a senior in high school and involved in many extracurriculars, as well as being a MN State 4-H Ambassador that year.  While there are things that I have wished my high school had, such as FFA, I am glad that it gave me the opportunity to take college classes for dual-enrollment without ever leaving my high school.  Those college classes in high school are the reason I am graduating a year early from college.

I attribute part of the reason that I had the drive to take college courses in high school to my farm background.  I've seen my dad work hard every day on the farm so I have always wanted to work hard myself and have always kept myself busy, whether it be with school work, work, or extracurriculars.
Posted by Anna Wagner Schliep at 6:09 PM No comments:

Since my dad does nearly all of the work by himself, he gets run down and tired; he's also had knee surgery  because milking in a tie-stall/stanchion barn took its toll on his knees.  To add to that list, he's had problems with pneumonia and has a chemical sensitivity.  Yet, he's kept going and has worked on the farm ever since he was old enough to help my grandpa with chores. 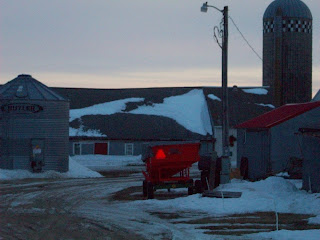 For a while, my dad was not feeling well at all and considered selling the dairy cows.  My immediate reaction was to scream "No!" inside my head, but I knew that was because of an emotional attachment to the cows and the farm, and wasn't necessarily thinking of what's best for my dad, so I didn't outright say that.  He's applied for off the farm jobs but couldn't really think of anything he'd definitely like to do as much as he likes farming.  Lately though, he's feeling better and the talks of selling the cows have significantly slowed.  I hope that things continue to get better, partly because I know my dad enjoys it and partly because I love the cows.

When the talk of selling the dairy cows started, I began to think even more about the future of the farm.  My brothers don't appear to have an interest in production agriculture; the oldest is majoring in Business Management and Finance at NDSU.  Part of me would love nothing more than to come back to the farm after I graduate, but there are a few things holding me back.  A major one is my asthma and allergies, but I'm also not certain that I'd love all parts of the operation enough to do it 24/7 and I don't know that I want to live near the same town for the rest of my life.  I love the agriculture industry, and dairy in particular, so I at least hope to work in the industry in some way.
Posted by Anna Wagner Schliep at 5:00 PM No comments:

Yesterday I attended a current events session on campus about Egypt.  It was a discussion led by two professors, one who had lived in Egypt for 30 years and one who I believe was born there.  At first, much of the discussion focused on their thoughts of the Egyptian government and the protests, but it moved to talk of Egypt's economy and culture in general and agriculture was brought into the conversation.

One professor discussed how Egypt used to be known for its agriculture and now they are one of the largest importers of wheat in the world.  There were several agricultural professors and students in the room, but most in attendance were not directly involved with agriculture so it was interesting to hear their thoughts.  A student next to me mentioned how the U.S. used to have a much larger percentage of its population directly involved in agriculture and now we have a smaller percentage feeding more people.  Egypt has not kept up with the technological advances in agriculture to match their growing population so they have to import much of their food.

Youssef, one of the professors directing the session, emphasized the importance of investing in infrastructure and technology rather than military equipment.  One attendee mentioned that the U.S. gives a lot of aid to Egypt but that it is primarily in the form of military aid and Youssef did not think that was the way to help a country prosper.  Investing in technology in agriculture would help Egypt and they could grow more food on their own.

One of the points that really hit me during this session was when Youssef mentioned that fewer Egyptians are going into farming.  His grandparents farmed but nobody took it over and many farms are rented out or sold because so many farm kids choose to go into education instead.  I live on a dairy farm that will probably have no one to take it over, so I completely understood what he was talking about.  It was so interesting to see how our agricultural systems are so different and yet alike in some ways.
Posted by Anna Wagner Schliep at 1:13 PM No comments: