This weekend I attended the wedding of a college friend up in Grand Forks, North Dakota (NoDak).  I've always enjoyed weddings and the bf was a groomsman in this one.  It was great to see some of my college friends and the entire weekend was a lot of fun.

During my visit with the Grand Forks branch we traveled all over northeastern NoDak, primarily visiting "alliances" or local ag stores that sell Wilbur-Ellis products.  Working in the Burnsville, MN office I typically see the "big picture", and visiting the branch and the stores that sell Wilbur-Ellis products allowed me to see beyond that.  It was a good experience to be able to see how the product bulletins and brochures that I put together in the office get used every day in the field to talk to growers.  Besides that aspect, it was so interesting to hear what the retail store workers were talking about and what issues are important to northeastern ND.  It's been a very wet spring and it had rained that day and the day before so the fields had standing water, but there was one test plot that was dry enough for us to walk in.

The places we visited in NoDak were small towns, with the biggest having a population of 604.  It's quite likely that most people haven't heard of Petersburg, Alsen, or Minto, ND, just as most haven't heard of Millerville, MN.  Millerville is the small town, population 100, just 5 miles from the dairy farm I grew up on.  As I was traveling through NoDak, all of the small towns I visited reminded me a bit of Millerville.  In Petersburg, we stopped at a gas station/ag service store that had a fridge full of pop.  If you wanted a pop, all you had to do was put some change in the box in the fridge - it was the "small town vending machine".

I've lived in Kansas City and I currently live in a Minneapolis suburb, so I don't have a problem with living in a city, but there's simply something different about small towns.  The small town vending machine in Peterburg reminded me of what I like about Millerville.  In Millerville, there's a gas station where the owner fills up your gas for you, puts the bill on your tab, and gives you a loaner car when you get an oil change.  I love having that available.

Small towns are made even more interesting because they're often farming communities.  In a place like North Dakota, where there aren't many big towns and the towns aren't real close together, farmers seem to come together in their communities.  I'm sure the same holds true in small towns across the U.S.  My family likes to say that farming is a spectator sport, and it's also a "sport" in which farmers like to feel a connection to other farmers.  With years like this where there are a lot of preventive planting acres and those that did get planted are behind schedule, it's even more important to have those communities.
Posted by Anna Wagner Schliep at 9:21 PM No comments:

I didn't get to see my dad for Father's Day and I felt bad because I saw my mom for Mother's Day, as it was the day after my college graduation, plus nobody was home with my dad for Father's Day this year.  The older of my two younger brothers is currently at Lackland Air Force Base for basic training and won't be home until November because he has skills training immediately after.  My youngest brother has been gone most of the month with different conferences and on Saturday he left for a boy scout camp.  I've been living in a Minneapolis suburb since the middle of May and my mom came to the Twin Cities area this weekend to attend a graduation party so she decided to spend time with me as well.

Despite not being with my dad for Father's Day, both of my parents have taught me the importance of family.  I believe farm families are especially aware of what it means to be a family and how important it is because they work together and play together.  My mom was a city girl who married a dairy farmer and they had very different backgrounds but both love the farm and have been incredibly supportive parents.

My dad grew up in a large family on the same farm that I grew up on and he always had to work on the farm. He went to tech school for Farm Business Management and joined his dad on the farm immediately.  Even though my dad had to work on the farm, my brothers and I were never forced to do chores, though he would ask for help when necessary.  I learned to drive tractor and feed cows because I wanted to and because I enjoyed it.

Working on the farm with my family brought me closer to them.  I did a lot of things with my brothers and my dad that most families don't do together: picking rocks, unloading hay and moving cattle.  (My mom cannot help much on the farm due to asthma and allergies but wishes she could more.)  Even though we would occasionally still fight while working, we often had good times too.  We got to have fun while working because we were interacting with family. 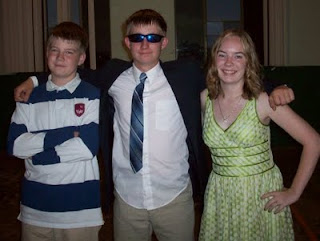 My brothers and I at YELLO, a state 4-H leadership conference, when I was a MN State 4-H Ambassador.
Besides working together, my brothers and I were all in 4-H, all showed rabbits at some point, and were all in drama in high school.  We're all different and those similar activities were good to have together.  My parents were always fully supportive of everything we were in despite being busy with my dad milking cows and my mom working off the farm most years.
Posted by Anna Wagner Schliep at 8:26 PM No comments:

There's no place like home.  I feel this classic "Wizard of Oz" line is even more true for people, like me, who feel a strong connection to the farm they were raised on.  I've traveled and lived away from home, and currently live 2 1/2 hours away, but I do love home and that's partly because it's where the farm is.

This weekend instead of staying in the Twin Cities, I went home after work on Friday.  My uncle has been living at my home for the past week to help my Dad with fencing so he was there and will be staying for at least another week.  It's nice that my Dad has the extra help because my youngest brother is the only sibling still at home but he's gone for most of June at a 4-H conference, Boys State, and a boy scout camp.

I always enjoy being back on the farm.  When I'm in the city I miss the cows, I miss the fields, and I miss doing chores.  I like to go back home and feed the cows and clean the barn, simply because I think it's fun.  I like to talk to my dad about the crops and about what's happening on the farm.

Cows are nice and I've had some great favorites, but this weekend one of my favorite parts was playing with the young calves.  We have 4 heifers in the pen that houses the youngest calves and they are all very friendly.  this weekend I petted the 4 young heifers for at least 10 minutes.  It's fun to see how curious they are and how much they like to be petted.

Of course this year hasn't been a normal planting season and I was able to talk to my Dad more about that while I was home.  My Dad hasn't even finished planting his corn and he just started last week.  Our farm has clay soil and it's been a cold, wet spring so planting got started very late for us.  My Dad is hoping to get some barley in as well but we don't have enough tractors to do both corn and barley planting at the same time.

On a non-ag related note, I also got to attend a grad party for one of my friends and her younger brother (her from college and him from high school), go to a bonfire the same friend had, and see the boyfriend who is currently interning at a company in Bismarck and living 7 hours from me this summer.
Posted by Anna Wagner Schliep at 8:54 PM No comments:

I love agriculture and I love all aspects of it that I am familiar with.  I love the cows, driving tractors, picking rocks in fields, and the people in the industry.  Sometimes though, I feel like I am being asked to take sides on what is often a controversial, and often discussed, topic in agriculture.

Being from an organic dairy farm has put me in a somewhat unique position, especially when it comes to applying for jobs in the agricultural industry where I might be representing conventional farmers.  It seems that there is often a great divide between organic and conventional farming, one that I don't think necessarily has to be there. I know there are plenty of people who will disagree with me and say that one system is inherently better than the other.
My family's dairy farm became organic about 9 or 10 years ago.  We always pastured our cows, but have even more pasture since we became certified organic.  Before we became organic, my dad started getting really sick and none of the doctors had an answer until one told him that it was a chemical sensitivity so he had to stop using chemicals on the farm.  When that happened, he looked into becoming certified organic, since we couldn't use chemicals anyways, and began the process.  Organic is a necessity for my dad to keep farming, but it's not for everyone.
We have lots of neighbors who are conventional farmers and I have never heard my dad saying anything to indicate that they should switch to organic.  He will certainly talk to them about it if they ask, but I don't believe it is something that should have to be forced upon all farmers.  Our neighbors primarily own small farms, like us, and care for the land and their cows like we do.  They simply choose to do so in different ways.
Posted by Anna Wagner Schliep at 1:59 PM 4 comments: