A Different Kind of Grocery Store

This weekend I discovered that Metcalfe's Sentry grocery store's Madison Hilldale location is right next to Target, which I love. I also discovered that Metcalfe's gives away the Wisconsin State Journal Sunday paper free with a $5 purchase and I've been meaning to start buying the Sunday paper, both for the coupons and because I like to read newspapers. I'd heard from friends that Metcalfe's was a good grocery store, and I've tried out plenty of grocery stores in Madison. Which one I go to depends on what I want at the time. Aldi is great for European chocolate and cheap basics, Woodman's has the largest selection and is the cheapest, and HyVee has a large selection like Woodman's and takes credit cards but Aldi and Woodman's don't.

Metcalfe's seems to do a great job of taking sustainability and local foods into consideration, but they sold your standard brands. Their large specialty cheese selection included many, many varieties of cheese from many cheesemakers including Babcock Hall, Carr Valley, Hook's, Crave Brothers, Boar's Head, Nordic Creamery, and others. There were samples of the one of the cheeses on gourmet crackers made by a Madison cracker company. The meat section included cuts from local farms, both organic and non-organic. The bakery included items from many local companies, and there was a section with local chocolate company selections. I ended up with Christine's sea salt caramels. The beer selection also included many local craft breweries, including several I'd never heard of before. I've talked about how I buy my food a bit earlier, and it's often primarily based on price with some location and quality depending on what it is and if I feel like indulging in fancy cheese.

One of the best features of Metcalfe's (besides the free Sunday paper, because who doesn't like free and coupons?!) was the "Food Miles" signs throughout the store below foods that were local. These signs said the company the food came from, the city it came from, and how many miles it traveled to get to Metcalfe's. Local foods were often slightly more expensive, but not always, and it's a great way for those who truly care about local to easily find the local foods they seek. Not all foods had a local option but, even though I still often purchase on the basis of price, it was great to see figuring out where a food came from made easy.

I'd like to know: Would you purchase more local foods if your grocery featured "Food Miles" signs? How do you make your food purchases? Let me know in the comments below.
Posted by Anna Wagner Schliep at 9:21 PM 2 comments:

I'm sure there are plenty of stories of unpaid internships working out quite well, and that's great. I believe my view on unpaid internships stems partially from the fact that I had 3 internships and they were all paid, as well as several part-time paid jobs in college that could have been considered internships. While one internship didn't pay much above minimum wage, the other two were pretty competitive for my industry and one even provided a scholarship, housing assistance and paid for me to attend a conference as well. Having these helped me pay for college and allowed me to do internships in the first place, as I grew up in a rural area and lived away from home in cities for my last 2 internships. 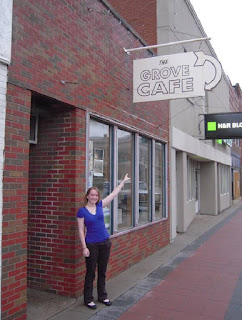 A tiny, amazing cafe I visited during a trip to Ames, Iowa for my internship with Wilbur-Ellis.

Luckily my industry of choice is one that believes in paying its interns and I know of many great internship programs in the agriculture industry. For example, here's an internship job description for Dow AgroSciences. While I certainly realize that an internship that provides this much to the student requires a large commitment for the company, creating an excellent internship program will benefit the student with the experience they gain and the company in being able to cultivate the next generation of workers and find the best internships to hire on full-time after graduation. While none of my internships resulted directly in full-time jobs at the company because they were all either small companies or small departments within large companies, they still gave me valuable experience. When a company invests in paying their interns and ensuring that they provide a valuable experience to the interns, they are investing in the long term.
Posted by Anna Wagner Schliep at 7:34 PM No comments: