Family Farm Day at the Museum

This time last week I was volunteering with the Dane County Farm Bureau at Family Farm Day at the Madison Children's Museum. We had baby animals (a dairy heifer calf, 2 piglets, and 2 lambs)  and activity stations set up on the rooftop of the museum in downtown Madison. Activities included making butter, identifying beef breeds, learning about Wisconsin crops, and having milk after exercise.

I had helped at similar events in the past, such as Lunch on the Farm when I was a Douglas County Dairy Princess, but never in such an urban area. There was a good turnout of families and everyone instantly wanted to see the animals. My favorite parts were hearing people's reactions when they were told that the calf was just born the night before and when one man said we had a Geico commercial when a piglet started squealing.

The rooftop was a great setting to hold the event in a city on a gorgeous day, as it has a pond and gardens and overlooks the capital and Lake Monona. Every kid we saw come through seemed to really enjoy every activity and I enjoyed seeing kids, and perhaps their parents as well, learn about agriculture. 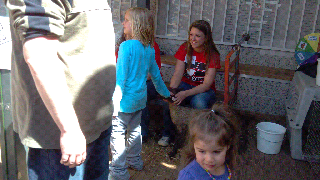 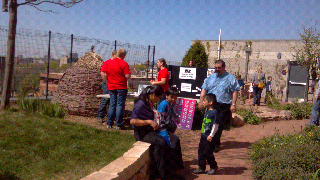 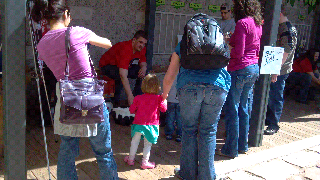 Posted by Anna Wagner Schliep at 11:20 AM No comments:

Learning From a Century Farm

While I was back in Minnesota for Easter, I visited the bf's family farm. His family has a 80 cow dairy and plans to put in 2 robots to do the milking in the near future, as his younger brother is taking over the farm and has a 78 head herd of Angus cattle as well. It's a Century Farm - a feat recognized each year by the Minnesota Farm Bureau at the Minnesota State Fair for families farming for 100 years or more. My own grandpa farmed my family's farm before my dad, but it is far from a Century Farm as he bought it and moved from a different farm when my dad was young, so it's interesting for me to see and hear the history behind a Century Farm. My grandpa passed away years ago, but he helped on the farm until he longer physically could. The bf's grandpa similarly helped out until he no longer could, and still talks about farming frequently.

After Easter dinner, the bf's grandpa started talking about when he was younger and farmed the same land the family farms today. He got to talking about how they used horses to do all the field work, how the mares were strong and well-built, and how it was 3 1/2 miles to one of their far fields. With horses, 3 1/2 miles was a pretty long trek. His grandpa is over 90 years old, and it still struck me to hear how different farming was back then and how much progress we've made since then,  even though I'd read about it previously. Somehow hearing it firsthand was just different. It's so interesting to think back to a time before tractors were common, before artificial insemination was used, before many things common on today's operations were even thought of.

His grandpa doesn't often talk about when he worked on the farm, but is fascinating and I hope to be able to hear him talk more about it. As the bf's younger brother starts his own beef herd and prepares to eventually take over the dairy operation as well, the farm has a bright future ahead and it appears to have had a great history as well.
Posted by Anna Wagner Schliep at 8:00 AM No comments:

Out of the Office

A few days ago I got to get out of the office for a bit to visit two dairies nearby. A group of us from work went to learn more about either dairy farms in general, for those with no dairy experience, or about the specific operations, for those of us with industry experience. The vast majority of us had a least been to a dairy before, but I was only 1 of 3 who had been raised on a dairy and thus was asked plenty of great questions from those who weren't. 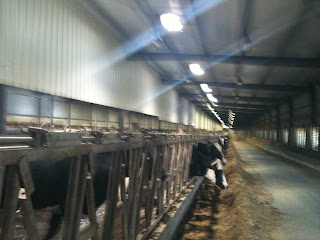 The first dairy we visited was Larson Acres. Larson's is a family operation with about 3,000 cows total separated into two milking parlors. The barn pictured above is the free stall barn for the newer milking parlor. This barn is 1/4 mile long and houses a little over half their herd. Larson's expanded within the last few years to built the new parlor and this barn. 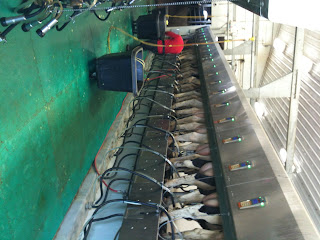 This is Larson's newer milking parlor, a double 20 parallel milking parlor. The parlor holds 40 cows at a time and milks just about 24/7, as the cows milk 3 times a day rather than the more typical twice a day. It's outfitted with the SmartDairy herd management system to monitor milk flow and yield, ID each cow as she comes in, and more.

I didn't take any pictures at the second dairy we visited, Brown's Dairy. Brown's is a family operation as well, but with 140 cows. The owner hires one full-time and one part-time milker, but otherwise does the vast  majority of the farm work, with both the dairy cattle and the fieldwork, by himself. His 4 kids occasionally help, though one is a college graduate with an off the farm job and another is a senior in college. Milking is done in a double 8 parallel parlor that was retrofitted from an old tie-stall barn and the office has a picture window overlooking the parlor, and is done at 3 am and 3 pm. After leaving Brown's, one of my coworkers in engineering commented that dairy farming is a hard life. I couldn't agree more, but it's one that dairy farmers love.

Getting out of the office to visit farms was refreshing and fun, as I always enjoy visiting different operations and seeing how other farms run. What's especially interesting to me is seeing how the larger farms, like Larson Acres, run because I am much more used to my family's 38 cow dairy and the bf's family's 80 cow dairy.

Posted by Anna Wagner Schliep at 3:24 PM No comments: